Bill Geisslinger and Torvald and Shannon Cochran as Nora in "A Doll's House, Part 2" 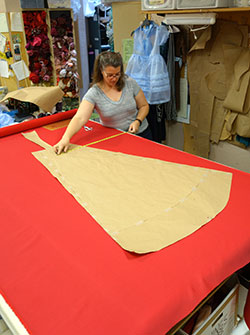 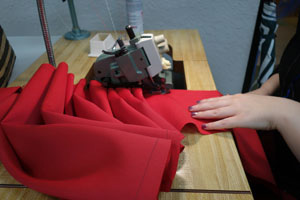 The red dress in process. 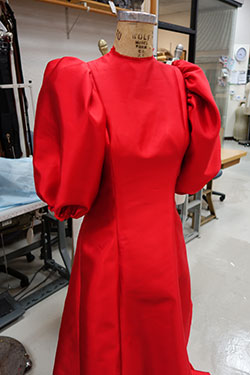 At the end of Henrik Ibsen’s classic A Doll’s House, Nora’s decision to leave her family to pursue her dreams was a shocker; with finality, she slams shut the door behind her. Lucas Hnath’s A Doll’s House, Part 2, sets the story 15 years later—when Nora returns with a firm, loud knock on that same door. Matching the boldness of her knock is the vibrant red dress she wears.

“Nora’s red figure is so striking against the coolness and even bleakness of a traditional Scandinavian interior and landscape,” says Sara Ryung Clement, costume designer. “It’s a visual expression of her confidence and vitality in her chosen life—she is willing to be seen and known and has a sense of freedom.”

The costume mixes design elements from both the late 19th century and present day to connect it to the narrative—on a set that uses period elements and with a script that uses contemporary language.

With a notation in the script that calls for “roughly period” costumes, Clement started her research with silhouettes of 1890s dresses to see how the fashions reflected the times. She brought a collection of images to an early meeting with playwright Lucas Hnath and director Shelley Butler to learn what resonated with them and then did a round of sketches based on the conversation.

“We loved the confidence of the full sleeves, strong shoulders and the sweep of the skirts,” she says.

Part of the distinctive 1890s silhouette came from restrictive foundations—stiff bodice lining or boning—which didn’t fit the goal for how the actors needed to move in a modern way in  A Doll’s House, Part 2.

“So no corsets!” Ryung says. “We let Shannon’s own silhouette be the main foundation for the garment, rather than molding it through a corset or building it out through an exaggerated bustle.”

Once the Costume Shop received Clement’s design drawings, SCR’s artisans set to work creating the pattern, cutting the fabric and sewing it together. Unlike an actual 1890s dress, Nora’s costume doesn’t have trim or additional fabrics worked into the design for what Costume Shop Manager Amy Hutto calls a “more layered or ‘fussy depth.’”

To aid comfort and movement for the actor, the fabric at the neck and forearms is a bit more stretchy.

But the dress is just one part of the overall costume.

“What audiences will see are her gown, cape, hat and gloves, along with necklace, hosiery and boots,” says Hutto. “Among the things they won’t see are two petticoats that support the fabric in the skirt.” Nora also has a few pieces of tasteful jewelry, but no wedding ring.

The result: a stunning, bold-colored dress with clean, modern lines, made from roughly 12 yards of wool and silk gabardine for the fashion fabric and lining. The back is finished with a vertical row of 20 black buttons.

UPDATE: During preview performances for A Doll’s House, Part 2, Nora’s dress was the lighter-colored vivid red.  But during that week—which is when adjustments can be made to the production prior the opening of a show—the color of the dress was changed, so a new wool-crepe fabric dress was built, using the same pattern and finishing touches.