The Story of *This* Red Riding Hood 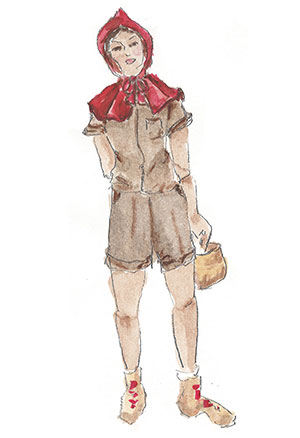 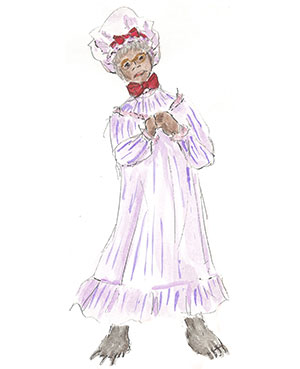 An actor named Wolfgang is getting ready to act out the story of “Red Riding Hood.” He tells us he’s going to play all the roles, and he’s going to skip ahead to the most exciting part of the story. But, just as he’s about to start, a Delivery Person walks onto the stage with a package she’s supposed to deliver to someone at the theatre. She becomes interested in what Wolfgang is doing. He isn’t too happy when she decides to join him in performing the story—especially when she insists they start at the very beginning.

Not only that, Wolfgang and the Delivery Person can’t even agree on how the story begins: he argues that Red Riding Hood is sent on a journey by her mother to deliver a delicious cake to her sick grandmother, but the Delivery Person insists that Red will take her grandmother a tureen of healthy soup. Since they can’t agree, they compromise: Red Riding Hood will deliver a loaf of fresh-baked bread with loads of butter to spread on the bread. It will be delicious—and much healthier than cake.

Now that they have settled their disagreement, they begin acting out the story, with the Delivery Person playing Red and Wolfgang playing Red’s mother. Mother tells Red to deliver a basket of bread to her grandmother, and to stay on the path and not talk to strangers. Also, she should not skip, because skipping is dangerous. Red says she’ll do as she’s told and then skips off to Grand-mama’s house.

For the next part of the story, Wolfgang takes on the role of the wolf, who stops Red on the path and tries to convince her that he’s her friend. (He also tries to convince her to open the package that the Delivery Person brought to the theatre, which is now in Red’s basket—but although she’s tempted, she refuses.) Wolf offers to walk with Red to Grand-mama’s house, to keep her company—and then he tells the audience what he’s really up to: he plans to eat Grand-mama once Red leads him to the cottage.

But Red is in no hurry to cooperate. She decides to pick some flowers for Grand-mama. The impatient (and hungry) wolf tries to speed her along by helping her pick flowers, but then there’s a new problem: a woodcutter is cutting down trees nearby—and the wolf is afraid of the woodcutter and his sharp axe. He hurries off as Red continues to gather flowers.

As night draws near, Red becomes more and more nervous. To make matters worse, the wolf ’s hungry growl scares away the quail. Red must now find her Grand-mama’s cottage by herself—with the wolf following her closely. He tries to lure her away from the path, but Red doesn’t fall for any of his tricks.

Wolf runs ahead and manages to reach Grand-mama’s house before Red, but when he knocks on the door, Grand-mama doesn’t answer at first. (For this part of the story, the Delivery Person plays Grand-mama.) Wolf finally gets into the cottage by pretending to be Red Riding Hood. Grand-mama has a few tricks up her sleeve which she uses to distract Wolf so he won’t carry out his plan—but in the end, Wolf chases Grand-mama around the bed, catches her and eats her in one big gulp.

But that’s only the first part of Wolf ’s plan: now he puts on Grand-mama’s nightcap and spectacles, climbs into bed and waits for Red to arrive so he can eat her, too.

He waits and waits and waits, but Red doesn’t come. Finally, Wolfgang (the actor) takes off the Grand-mama disguise and tells the audience he’s going to go look for Red backstage. As soon as he leaves the stage, Red arrives at the cottage. When she finds no one home, she decides to look for Grand-mama in the garden. As soon as she leaves, Wolfgang returns and reports that he didn’t find Red backstage. As Red and Wolfgang keep entering and exiting the stage at different times, they keep missing each other. After a while, Wolfgang gets so frustrated that before he exits again he takes off his wolf costume (which is actually just a pair of gloves that look like wolf paws) and leaves it onstage. When Red returns she finds the gloves, puts them on and magically becomes the wolf. Wolfgang returns and finds Red’s beanie; when he puts it on, he magically becomes Red Riding Hood!

Now they’ve switched roles, but they continue to act out the story. Red enters Grand-mama’s cottage and Wolf—disguised as Grand-mama—greets her happily. Wolf coaxes Red to come closer and closer to the bed. Red notices what big eyes, what hairy arms and what terrible, big, yellow teeth Grand-mama has—whereupon Wolf jumps out of bed and tries to catch Red. It looks like Wolf is going to get her—until Red remembers what the woodcutter told her about wolves and fire. She grabs the lantern and uses it to back Wolf up until she can push him into a trunk and lock him inside.

Just then, the woodcutter happens by the cottage. He gets ready to kill the wolf, but then he and Red hear the voice of Grand-mama coming from inside the wolf. The woodcutter tells Red she’ll have to cut open the wolf in order to save Grand-mama. Red reluctantly agrees, but when she climbs into the trunk, the wolf manages to eat her, too. But all is not lost. The woodcutter uses his axe to free both Red and her grandmother from the wolf’s stomach. Happy ending! (Except for the wolf.)